This morning we set off for Chuzhou (say “chew-joe”) with anticipation. It is a “small” city of “only” 3 million inhabitants according to Michael, and it is about 50 miles east of the outskirts of Hefei. Still, with traffic in each city, it took us about two hours to drive there. Absolutely nothing looked familiar to me on the way! I think it’s due to a combination of being distracted by a fidgety baby the first time going to Chuzhou, as well as considerable development in roads and other infrastructure in the past 12 years.

Nothing looked familiar to me until we turned onto the street that led to the gate into the grounds of the orphanage. Not only did I recognize this place, I recognized a very important person waiting for us, the director/president of Chuzhou orphanage, Mr. Dou (say “doh”). He smiled broadly and followed our van through the gate to welcome us. He immediately pointed to Abbie’s dimple and said he remembered her. Two women were there to greet us as well, though they did not take care of Abbie during her time at the orphanage (the women I brought pictures to see again have since left). Still, they warmly and proudly greeted her as if to say, “what a good girl you have grown into.”

We walked slowly toward the building where Abbie spent her first 14 1/2 months of life. I recognized the clotheslines full of diapers as if time had stood still. We visited the small playground where I spotted the stone turtle on which she had once played. It was as if time had stood still. We walked up the ramp with the blue railing and through the orphanage doors. We turned left and went into the play room, which felt much warmer today than on January 14, 2005. We turned right and walked down the hallway that had just been washed, as I remember it to have been in 2005 with water visible on the floor. We walked on and went into the last room on the right. There was the window by which Abbie slept in her blue metal crib. The cribs have been replaced with small wooden ones, but the quiet room was the same. Ten babies were laying silently, and it was as if time had stood still. I had the same thought today as I did in 2005: a room full of babies shouldn’t be quiet. Though well taken care of, they had no choice but to learn how to self-soothe.

The exception to this feeling of time standing still was the type of children in the orphanage now. Michael said the Chuzhou orphanage is a small one with only about 50 kids (most in Anhui province have 100-200). Unlike our perfectly healthy Abbie, the babies and children in orphanages now – nearly exclusively – are disabled in some manner. I am thankful that girls are not being abandoned just for being girls, but still the notion of abandoned babies is troubling. As I wrote in the post about Alenah’s Home, babies continue to be abandoned if they need surgeries, therapies, or other treatments that families cannot afford. Today we saw children with motor impairments, Down’s syndrome, cerebral palsy, and other developmental disabilities. Those who appeared “normal” likely had a heart condition or other medical issue.

We stood in the baby room for a few minutes before heading back down the hallway and out the door. We went down the ramp with the blue railing, past the playground with the turtle and the clotheslines full of diapers. I was wondering what Abbie was thinking and feeling while at the same time being overcome with my own emotions. “I don’t want this to be where my daughter started!” I thought inside. I wanted to teleport us back to our home in the forest and get her out of here asap. It seemed like such a sad place to me, but when I looked at Abbie I saw joy. Not only joy in the miracle of her being my (our!) daughter, but joy in seeing her experience of Chuzhou orphanage. She was taking in this place as her own story, her own heritage, her own beginning.

We walked toward the gate – but not through it yet – and headed to a nicer building I had never been in before. Before going in, we saw two new buildings that Mr. Dou wanted to show us. This fall, the current orphanage (and home for elders who don’t have sons to care for them…they go together in the “social welfare institutions” of China) will be demolished and the new buildings will be utilized. We made it just in time to see Abbie’s orphanage, for which I am so very thankful.

We went into the nice building and were greeted with a bright welcome sign – we felt like celebrities! We sat on fancy sofas and were given cups of hot tea while we went through all of the records about Abbie. Michael translated as needed (Abbie did a pretty good job!), and we saw two new photos we had never seen before. Mr. Dou wrote in Abbie’s journal (as did her nanny back in 2005), and they even became WeChat friends! We went back outside and took some photos. Mr. Dou even took several selfies, which made us smile – he seemed to really enjoy our visit!

It was time to go to the gate. This is Abbie’s “finding site” from the day of her birth. (I like that they call it a finding site rather than a leaving site or an abandonment site.) At this point, one of the women was holding Abbie’s hand, so I followed behind. It was not a sad moment as I expected, watching her walk through the gate, but rather another one of joy. This was her beginning – her native place – but it is not her home. As she wrote in her journal, “I don’t belong there. I belong here, with Reed, Erin, & Jackson. I belong with my family.” There is so much more I could write, but I will leave it at that.

Next we traveled a short distance to a fancy hotel for an amazing lunch, courtesy of Mr. Dou. We had a private dining room with the biggest lazy Susan in the middle of the table that I’ve ever seen! The delicious Chuzhou dishes kept being brought out. We grabbed bites with our chopsticks as the center circle turned, and we enjoyed fried chicken, sweet and sour pork, head-on perch, pork meatball soup, beef hot pot, rice, watermelon, and about six different kinds of vegetables. We also had barley tea and fresh watermelon juice to drink, and Mr. Dou kept wanting to clink our glasses and say “cheers!” He invited Abbie to sit next to him, and she wrote in her journal that it felt like “the most important person in the world” invited her. 🙂

We had a nice conversation through Michael’s translation help, though Mr. Dou and the orphanage women noticed Abbie’s good Chinese skills. 🙂 The eating and talking came to a natural conclusion, and we said our goodbyes. We gave each person a small thank-you gift, though it seems impossible to fully express our gratitude to them. We drove back to Hefei in a fairly quiet van…it was a good quiet though; thankful for the experience, the embraced story that Abbie now has, and that we get to go home tomorrow. We are ready! 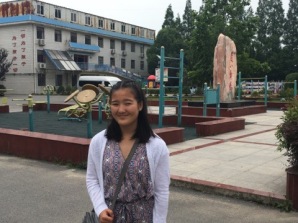 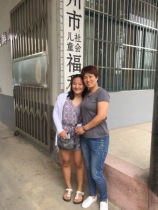 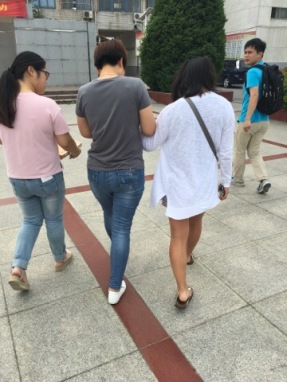 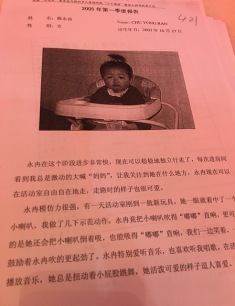 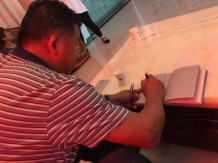 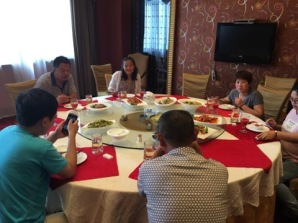 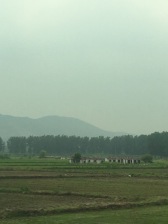 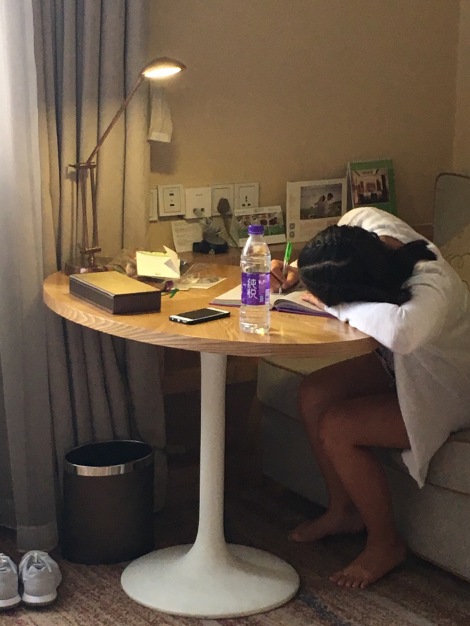