I awoke to a mix of clouds and sun…and quite a lot of wind. Table Mountain has been covered by its “table cloth” of clouds whisking toward us, which means rain is on the way I guess. I slept okay, but was quite cold…the houses aren’t really heated here; I just have a panel on the wall that emits a bit of heat, though it is away from my bed, which is near a window that is a bit drafty…that all makes for a chilly combination. The street is noisy too, so I will have to adjust to that. And there was a barking dog…

Sheila took me on a drive this morning, after her DMV task. We drove away from Cape Town; I haven’t seen the city yet (I am in the suburb of Newlands). We drove toward Muizenberg, St. James (& “Danger Beach,” a surf spot), and Kalk Bay; all on the east side of the Cape. I included a couple of photos from the drive. It was beautiful; kind of reminded me of the New Jersey southern shore towns…a bit run down, but lots of charm. The mountains remind me a bit of the Wasatch in Utah; the trees & flowers of northern California (Sheila has orange, avocado, guava, & grapefruit trees). I guess it’s nice to have something to map on to.

I am now at the Good Hope Studies center, which is a 10-15 minute walk from Sheila’s. It is a safe neighborhood with shops and other conveniences between GHS and “home.” I feel quite disoriented, but I know that will subside the longer I am here. The train station is nearby too, but I will tackle that another day. Everyone is friendly, and it is very nice to be back online, at least during business hours.

The classroom for our first two weeks is another 10-minute walk from GHS in Aberdeen Guest House (at least I think that was the name). We will go there tomorrow so I can try out my iPad and connection with the projector (fingers crossed). I guess it has wifi too, so that is a nice surprise (we had been told no wifi there). Brenda is my new friend at GHS as she is doing a nice job orienting me.

I feel so disconnected from anything familiar now, so that is trying. I trust God in bringing me here, and I know He is with me. I also know that once I am settled a bit more and students arrive that I will be feeling better about things…now I feel a bit lost! 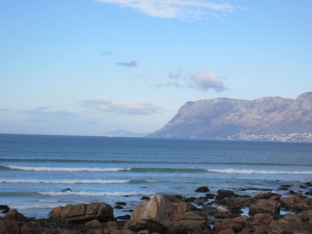 7 thoughts on “Cape Town by day”