The highlights of this quiet Wednesday were a talk in the launderette and a walk in the neighborhood around Trinity…both were shared with Reed, which makes everything even better.

In the morning, we visited the Trinity launderette to get everything washed up and ready to last the next week. While waiting on our clothes to dry, we talked with an older gentleman who was there emptying out the Euros from the machines (his son’s business). He had kind eyes and spoke with a thick Irish accent. He asked if I was Reed’s girlfriend or wife, and he couldn’t believe we’ve been married 17 years (said we look too young). He said he’s been married 44 years (pause)…to the same woman. 🙂

Then he shared that he has been told he’s got 18 months to live…he has pulmonary fibrosis. It runs in his family, and some have died from it at a much younger age. He said he is trying to keep a positive outlook and enjoy what time he’s got left. He keeps himself busy, and he has straightened up his behavior as he gets closer to the end and having to answer questions in heaven. He also spoke of the conflict in the world and how people just need to be kind to one another. Our conversation came to an end when he had to get going to the next launderette to collect the coins. We wished him well and he went out the door. We don’t know his name and will never see him again, but he taught us some big life lessons in the small time we shared.

After lunch at the Buttery, Reed prepped for his last class, and then he had some time before the students arrived. We set out for a pint at yet another pub, and then we walked around Temple Bar a bit. We headed over to Grafton Street for gelato, and then we walked back on Dawson Street. We strolled across campus and marveled at the architecture. We have come to know our neighborhood around Trinity quite well, and we are appreciative of the time we’ve gotten to spend here. I think this will remain a very special place to us, and we will remember the very special man we met here this morning.

Context for a great conversation.

Should we feel guilty about having gelato without the kids? 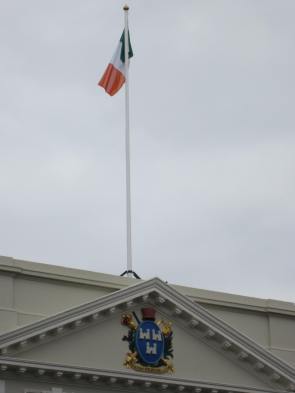 Have loved our stay here

On the right, you can see the the sculpture representing science, divinity on the left

Our group of student rebels

…and our very own rebel!