Here is a Monday morning report of the events this past weekend, as I know them, picking up where I left off on my Friday morning post:

Friday afternoon/evening: Sheila (my home stay hostess), Binci (see the post from last weekend to meet Binci), and I enjoyed lunch at Barrister’s, a local rugby pub. As the ladies had told me about, the horse-drawn wagon delivering a keg of the local Castle’s lager showed up at 2:00 sharp. This only happens in the first Friday of each month, so I was glad to get to take it in (see pics). We gladly accepted our free draughts of ice-cold Castle’s (Sheila left, me center, & Binci right), and we had a nice time chatting about this-and-that. One of Binci’s daughters works in social justice research, so we talked about the possibility of her visiting our class…I hope it works out.

After lunch, I walked down to the nearby Methodist church to see what time Sunday services are; the English (or Afrikaans?) one is at 9:00 (the 11:00 one is in Xhosa). I will try the early service and cross my fingers that I understand what’s going on! Friday evening was quiet; salad with Sheila to compensate for our bigger lunch out.

Saturday excursion: We had a GREAT day touring the Cape, although we were two short as Kjersten and Kelsey stayed behind. Don’t worry…the baboons did not get them. Sadly, they weren’t feeling well…cold symptoms mostly (sore throat, fever, sinus pressure). 😦 We missed them dearly and hope for a speedy recovery…I called when we finished our tour, and it sounded as if they still didn’t feel well, but had gotten some rest and were being well taken care of by their hosts, Patrick & Beryl.

The other five of us – again with Rashied’s great guiding – started out driving behind Table Mountain toward Camp’s Bay as we did a few days ago, but this time we went south to Hout Bay. This is a small fishing village with soft sandy beaches. We arrived at the harbor, and we experienced one of the highlights of the day first thing: we got to pet a seal! He was the alpha male of the harbor and was 48-years-old, according to the man who assisted us. We all took turns, and then the seal lumbered out of the water so we could get even closer. It was pretty cool. Then we got a few souvenirs at a craft market right along the harbor.

We followed the Atlantic south to Noordhoek and on to Chapman’s Bay where we ascended up along the rocky coast. It offered amazing views, and we learned the road was closed from 2002 to 2009 while they secured the route of falling rocks. It was pretty amazing…and no rocks fell on us or the streams of cyclists we passed. Then on toward Scarborough…

Somewhere along the way in one of the small towns, we were excited to encounter our first baboons. We had read the warning signs and heard about their aggressive nature (because people feed them and then wonder why they come after their sandwiches), but hadn’t yet seen them. We were starting to wonder what all of the fuss was about, and then we saw them. They were out and about looking for food in garbage cans and jumping from roof to roof while the townspeople hollered at them. The two men on “baboon patrol” we’re trying to help shoo them away with sticks, but I think the baboons had the run of the town this day. Down the road a bit, we encountered a traffic jam…the culprits = baboons. 🙂

We stopped briefly at an ostrich farm, and then we headed further south to the Table Mountain/ Cape of Good Hope National Park. The first stop was to put our feet in the water where the currents of the Indian and Atlantic Oceans converge. We could see it happening – the waves crossing – and we survived the slippery, rocky, seaweed-covered, bug-infested slow walk to the water so that we could stand in it briefly. (It was gross, but worth it.)

Next we drove down a little more to Cape Point, where we first took a break and had lunch. Then we walked up and up and up (and up and up and up) to the lighthouse. There is a funicular (an on-ground tram) called the “Flying Dutchman” that we could have taken, but we opted for the hike. It was tiring, but good exercise and quite a view along the way, as well as from the top. Based on the sign to New York, and the conversion from kilometers to miles, we figured we were about 10,500 miles from home. Wow!

We drove a bit more to the penguin colony, just south of Simon’s Town. We were delighted to see the cute little guys on Boulder’s Beach. The fluffy, furry babies are especially darling. We didn’t learn why they’re called “jackass” penguins, but we did learn that they live for 12-14 years, lay two eggs once per year (which are looked after by the males, just like big emperor penguins), and they mate for life (the partner dies within six months of the other). And, it wasn’t really smelly at all.

After a round of gelatos, Rashied gave us some time to walk on the beach at Simon’s Town. This was where we thought we would use our “swimming costumes,” but the overcast day didn’t say “let’s go swimming” vey loudly. Jen and Courtney got in more than the rest of us, but no real swimming occurred. We did try to rescue a few starfish though…way to go, Oregon girls. 🙂 By the way, Simon’s Town is a SA naval base as well.

We drove through Fish Hoek (where Brenda lives, by the way), and then our last stop was on the mountain above Kalk Bay. We saw where the “shark spotter” stands and watches the beach where the Guinness Record of the most surfers on one wave occurred. He said that the last shark sighting was two weeks ago, and that the great white shark was over three meters long. If he sees one from the mountain, he pushes a button that cues a siren on the beach, and he radios down the coordinates of the shark. Two spotters take shifts each day, and many more sightings occur in the summer (remember, it’s winter here). It was an impressive effort…I will not worry about Kym if our Hawaii girl does some SA surfing!

Saturday evening for me was another rugby game on TV with Sheila and Binci; we again had salmon salads, etc., like last Saturday…it’s become our tradition, I guess, and I heard a few “yum yum” & “luscious” comments about some of the players on the opposing team. 😉 This time the local Stormers took on the Blue Bulls of Pretoria (who were sporting all pink uniforms for breast cancer), in Pretoria, and the Stormers won, 19-14. Then the national South Africa Springbok team was announced. Even though I am a newbie, I could tell this was a big deal…I think three or four Stormers were selected. Next Saturday, SA takes on England, and I’m already looking forward to it. I think some of the girls are going to a soccer game tomorrow, so we’ll have to compare notes on SA sporting events.

Sunday: I checked out the Methodist church in the area; since those are my roots it seemed like the most familiar choice. It’s only about a 10-minute walk from Sheila’s house, and after waking up a bit apprehensive to go, I was so glad I did. It was in English, thankfully, and the pastor reminded me a bit of Reed (so you know he was good). 🙂 He was a dynamic, entertaining, thoughtful speaker, and he could lead us all in praise songs and hymns too (Reed is much cuter though).

The sermon was from Ephesians 5:21-33 (the submit, love, respect verses), and he applied it to marriages, of course, but also to the wider church body and all of our relationships. It was a good reminder of how Christ intends us to be in our treatment of one another. We were encouraged to behave toward others as if they are already the people they are meant to be. We should see the love of God shine out of us through how we treat others. So good. So glad I went.

Then I spent awhile in Cavendish Square (a huge [6-story?] mall) on my way home. Sheila had told me about an espresso/chocolate shop there…totally my kind of combination. I found it quickly, got my single shot of espresso (& free piece of chocolate!), and sat down to enjoy my treats and do a bit of people-watching. There were families around me having coffee, juice, and pastries, and the sound of bickering children and exasperated parents reminded me of home. 😉 Just kidding (well, sort of). I turned on my iPhone to see if there happened to be free wifi, and lo and behold, it was a hot spot! After many unsuccessful attempts, I was able to register and catch up on some emails. I didn’t have my iPad with me, so I couldn’t update the blog, but it was nice to be connected for awhile.

My mall wandering was a bit disorienting at times…I think there are three or four banks of escalators among the six stories of shops, theaters, and food courts…but I survived. I bought a couple of small “coffee table books” of Cape Town and South Africa, something I had been wanting to find. I also bought a pair of “black comfy boots” (totally what the receipt calls them) for ~$13. I have found a couple of little things for Reed and Jackson, but the perfect “I-miss-you-and-am-so-happy-to-see-you” gift for Miss Abbie still eludes me. I am certain I will find it by June 21. I think I may need to get another suitcase before I return home.

Then it was Kingklip (local fish) and veggies for lunch and a return walk to Sheila’s. At 3pm (till 7pm!) the flotilla on the Thames River in London was televised, so Sheila, Binci, another neighbor, Pam, and I watched it together. We started at Sheila’s, but the local SA channel didn’t have audio commentary, so we walked over to Pam’s house to watch it on BBC. This is part of the celebration of the Queen’s jubilee (i.e., 60 years on the throne). It was quite something…the pageantry and all…especially watching it with three women with English ties!

Onward to another full week…Today (Monday) we have class and then an afternoon with Rashied at the District Six Museum and walk around Greenmarket Square. I hope to file a full report tomorrow morning! 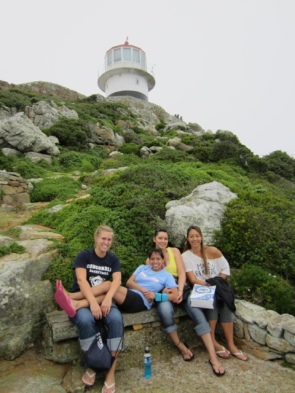 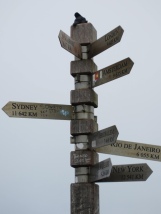