Man it feels great writing this on our last night in China! Now it’s just an oath, a visa, and a short hop across a big ocean and we’re home!

Today started off great as Abbie slept in until about 7:30 and did so after a pretty good night of sleep. She was awake for fewer minutes overnight and was able to self-soothe in order to get back to sleep upon awakening. She’s making progress! And tonight’s bedtime routine, although a little later than normal because we had a farewell dinner, went wonderfully. She had her bottle in my lap and then into the crib she went. What surprised me was that she just stared at me for a while, and then proceeded to get herself to sleep without a fuss. Again, we’re making progress, so much so that Erin came out of the bathroom and said: “You rule!” I like when she says that.

After we had breakfast this morning we had a 30-minute videoconference with Jackson. It was so good to see him and talk to him. It was great to be able to tell him we’d be home soon and that we couldn’t wait to give him a big hug! He was even calm enough to understand most of the time. After we finished I was sure thankful that Al Gore had invented this neat thing called the internet (which, urban legends aside, he never actually said in so many words).

On that subject, the internet situation over here has been interesting. I’ve found that most commercial sights are freely available over here in China (even news sites and bible sites). I guess I didn’t expect that given that I’ve heard that the PRC limits free speech. Contrary to my expectation I’ve been able to access everything on the net that I’ve wanted to with just a couple of exceptions. Most notably any sites hosted by Blogger (oh yes, I forgot to mention that CNN occasionally “blacks out” during certain stories, too). I discovered this when trying to access the Thelanders’ adoption blog and couldn’t. This was replicated by others in CHI who were trying to access other blogs (or their own) in different cities throughout the country. I find it very interesting that we wouldn’t be allowed to see these free-speech oriented sites. TECH-SPEAK COMING, BE WARNED: Never to be stymied, I was able to get around this filtering by connecting through my business VPN and from there to blogger sights just fine. END OF TECH-SPEAK. By the way, it was so wonderful to see that Michael, Joie, and family are now a family of five. I look forward to meeting you Kelly Johanna!

In other news, our Consulate paperwork went through without a hitch. So tomorrow, at 11am Guangzhou time (7pm Pacific Time, Thursday for you) we’ll take her citizenship oath. At this point we could make a legal case to the US courts that she’s a citizen if we needed to. The deal won’t be completely done, however, until we hit the tarmac at LAX. That will feel great and will be a moment of celebration on the flight, I’m sure.

The rest of the day was uneventful. We did a little last minute shopping and then went out for our farewell dinner. CHI took us to a great restaurant on the water (well, us and 39 other families) where their signature is Dim Sum. Even after two solid weeks of Chinese food, I’d say that the Dim Sum was Yum Yum (I’m so un-funny!).

Okay…so tomorrow I’ll likely have a one last chance to post an entry before leaving for the US. In it, I hope to have a few final reflections on our experience her in China and in meeting Abigail.

I’ll sign off now. We can’t wait to see you all! Please pray for our safe journey home to Jackson, and to all of you! 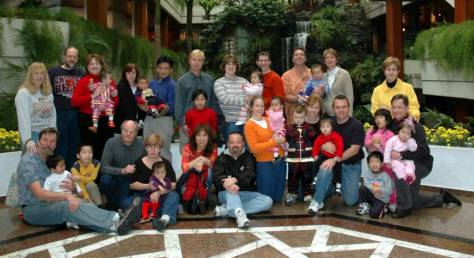 The Chuzhou Welfare Institute group (plus a few extra families from other provinces).

Little girls refusing to take a nice picture on the “red couch.” Oh well! Left to right I’ll introduce you to the little girls from Abbie’s orphanage: Maya (lower left), Abbie, Lauren (1 spot right of Abbie), Kira (2 spots right of Abbie), Zoe (3 spots right of Abbie and crying like mad), Jillian (all the way on the right side of the couch with her Dad, Mike, touching her), and Katie (Bottom right corner of the frame, barely seen – at two, she’s the oldest of this group) Note:We had a couple of extras on our couch we didn’t have in our group. They posed with us because they were in a province by themselves.

They’re now getting ready for Chinese New Year in the hotel. This rooster is part of the scenery now.

A shot with Li Na, our coordinator. She rules!

Abbie learning to like oranges (didn’t take any convincing).