Well, I’m feeling a little tired tonight so this is likely going to be a shorter than usual post. Oh well, you should have more than enough good news from the Thelanders’ blog because in just about seven minutes, they’ll be welcoming their new daughter, Kelly, into their family. What a wonderful moment for them all! We’re so happy for them.

Today we did a little sightseeing around the city of Guangzhou. To tell you the truth, I’d gladly forego such events if I could trim a day or two off of our trip length. Oh well, at least we got some fresh air and saw some interesting architecture and art. After visiting both Yiexiu Park, where the Five Goats statue is, and the Chen Clan Ancestral Temple, we went shopping at a wholesale pearl market. After looking into the selection at several shops, we got a strand of “high-end” pearls for Abigail’s 16th birthday. Who knows what high-end means; for us, it meant paying a whole $15.00 (some families were paying as little as $5.00 for the “lower-end” stuff). The market was incredible as there were just bags and bags and bags of pearls to select from. We had a crash course training by our guide on how to tell good pearls from bad ones. I hope I listened.

After returning to our hotel we decided to walk around the city some and enjoyed ourselves quite a lot. Most of the enjoyment comes when people stop us on the street and comment on what a beautiful baby Abbie is! One of the new shopkeepers we met (“Lucy”) asked what province she was from. When we said “Anhui” she giggled and said “Oh, she’s a Spicy Girl!” Apparently, the food in Anhui is known for its heat. As a dad, I’m not so sure that I like this nickname. Another shopkeeper we’d met the other day stopped us again and remembered our names. They’re good marketers here.

On the walk, I found a good espresso bar. (Which reminds me, I saw a Starbucks near the pearl market, but didn’t have a chance to get anything.) The coffee here so far is better than in either of the other two cities we’ve been in and I’m hoping that tomorrow it gets even better. I noticed that our hotel offers (for a price) coffee from the Blue Mountains in Jamaica. I’ve read rave reviews about this coffee before but have never seen it offered anywhere. I’m looking forward to a steward delivering it to our room in the morning.

As we were tired this evening we decided to order room service. I decided to stray from my typical dinner (either pizza or a burger) and order the hot dog. It was about half way through it that I remember hearing horror stories about hot dogs and what goes in them in the States…then I remembered I was in Guangzhou where they “eat anything with its back to sun” (or so the Cantonese saying goes). I then wondered what things went into the hot dog I was enjoying. At least whatever I was eating tasted good!

In more important news Abbie is doing wonderfully! She seems happier and more energetic every day and we know that she’ll handle her brother well (the only question that remains is how he’ll handle her). On several occasions today she even preferred my arms to Erin’s, which is a good sign of attachment to both of us.

Tomorrow’s a light morning, so if Abbie will sleep in past 7am that would be nice. In the afternoon we have her medical screening and then in the evening we booked a 2½ hour Pearl River dinner cruise. Any guesses how much for the three of us to have a buffet dinner and the cruise? $30.00 We thought at that price we shouldn’t pass it up. We’ll likely not have the opportunity again any time soon. Hopefully it will be a nice evening.

We’ll I’m off…this was longer than I thought and less interesting than I’d hoped :^)

Sightseeing in front of the Five Goats Statue in Yiexiu Park, Guangzhou.

There were gobs of people “getting their morning exercise” playing with a shuttlecock.

Erin and Abbie outside the Chen Clan Ancestral Temple. Erin says “The flowers here are gorgeous.”

Inside the temple grounds… 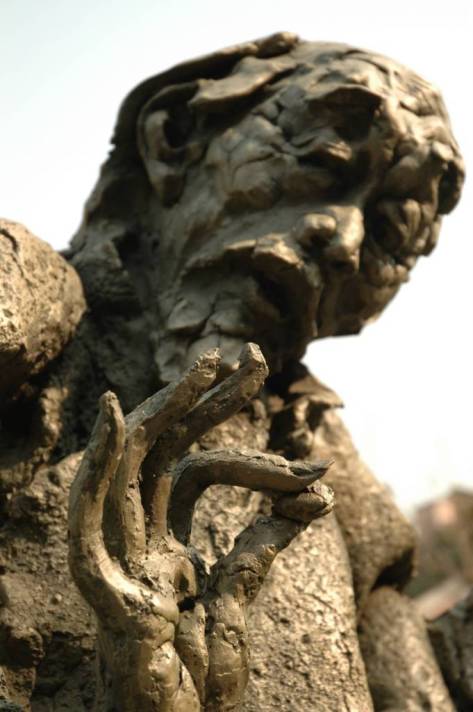 First in a series on the creepy sculptures they had here! I’m trying to be artsy (“Here, notice the way the photographer held our interest in this frame by mirroring the focal point the subject being photographed is holding…blah…blah…blah…” :^)

Second in the series… 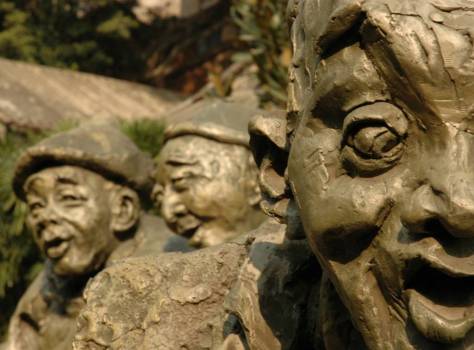 The face on this one gave me the creeps, so naturally I thought, “Hey, I should take a picture of this!” Mercifully, last in the series…now on to more of Abbie!

Abbie didn’t find the sightseeing all that interesting either.

A bride and groom about town in Guangzhou…she’s already got a wandering eye!

And the award for best fed baby in any Chinese orphanage goes to…Abbie! (Taken just before bed tonight.)