Today we had quite an experience with our little angel!

It began around 6am after our Abigail slept through the night. This surprised us but really shouldn’t have as yesterday was such an emotional day for her. When she woke up the poor thing just laid there for a while limp. One can only imagine what she might be thinking waking up in a world that is still so new it is counted in hours, rather than days. She looked confused and sad, but was comforted well by Erin (in fact, she appears to have bonded more readily with Erin than with me, which is actually good, or so the research says). After a few minutes getting ready for the day, we video-conferenced with Jackson (and Aunt Cindy and Uncle Jeff), which was fun! Jackson just loves making faces in the camera. He seems to be doing great and even told Abigail that he loved her. That was wonderful. Seeing him was definitely bittersweet, being so far away is hard, but at least with technology we can feel a little closer.

We’ve noticed some things about our little girl that make us sad for her, but are the natural consequences of being institutionalized. First, she doesn’t like to have her clothes changed, let alone her diaper. Our guess, judging from the clothing she arrived in and from the stories of others in our adoption group, is that she was moved out of her clothes only very rarely. As the infants and toddlers here where split-bottom pants, there would not be any need to remove clothing to diaper her. Add to this the fact that there aren’t extra clothes to change a baby into, and, well, they’re probably just kept in them. Even in the midst of all of this, Abigail was finally able to smile during the transition into her blanket sleeper tonight. She’s starting to trust us!

Another thing that we’ve noticed is that she doesn’t let any food go to waste. She would eat all day, and anything placed in front of her, if we’d let her. Again, this is typical but you just don’t have the sense of it until you see it happen right before your eyes. So, if there are four crackers placed in front of her, she’ll stuff two in her mouth right away and hold on to the other two so they don’t get taken. It’s not even that she does this secondary to being malnourished (she’s actually pretty chubby). So it must be just a “fend for yourself” mentality that she’s had to develop. What’s really sad to me is that this little 14-month-old has learned to conserve what is important to her as well. When there’s no more food in sight and all she has left is what’s in her hand, she moves into conservation mode, extending the life of stores. For example, if she’s down to two Cheerios, one in each hand, she starts eating them bit-by-bit. And then when she’s done with those, she’ll come back and search the plate or bowl for crumbs she can pick up. Remember, this is coming from a child who’s been well fed. The moment of the day in this domain was when Abigail decided that she could spare a little of her food in order to feed us!

Finally, we’ve noticed (until this afternoon and evening, that is) that Abigail has been very passive, having to be moved instead of moving and not initiating play or even much in the way of self-soothing behavior. But after her nap this began to change and she started being more interactive with us! She began dancing a little bit, waving to us, playing tickle games, and laughing a lot! That was so fun. Tomorrow I may try to post a very short video of a moment of this with Erin.

The most precious moments of the whole day happened just before Abigail went to bed. She was laying down on Erin’s stomach while I laid beside them. Over the course of fifteen or twenty minutes Erin and I rubbed her back, played with her hair, tickled her, or just looked into her beautiful eyes (she has the longest eyelashes!). Half way into this Abigail began reciprocating our actions, just looking into our eyes and patting our hands and arms. It was great!

Well, that’s Abigail’s day. Again, we imagine that she’ll sleep well, after taking so much in today in addition to grieving the loss of all she’s known. Oh…I almost forgot, she’s starting to respond to a few English words – like “more” (as is food) and “wave,” I even thought I heard a Mama today, but who knows.

Okay, what else happened? We went to a supermarket in downtown Hefei and were quite a hit with the locals. I guess they’d never seen six pairs of American’s each with Chinese babies. I myself was a hit too, at least with one woman, who came right up to me, pinched my nose, and giggled. Our guide said she was probably mentally ill, but they could just be trying to make me feel better. Which reminds me, the notary we met yesterday thought I looked like a little boy and then complimented me on my choice of wife, thinking that Erin must be taking great care of me. On the brighter side, I discovered that our hotel has the greatest 1/3 POUND BACON CHEESEBURGER! I’ve made a pledge that I won’t eat more than one a day. We’ll see if I’m successful.

Well, I didn’t snap too many shots today…but what I did take, follows. Before those, however, thanks so much for your prayers, everyone! And thanks also for your emails, we love them and are responding when our internet isn’t giving us fits.

We miss you all and are one day closer to being home again. 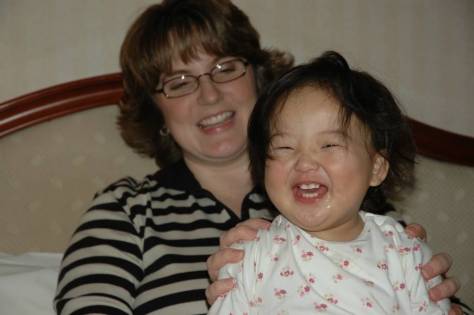 Playing with mom at the end of the day!!! 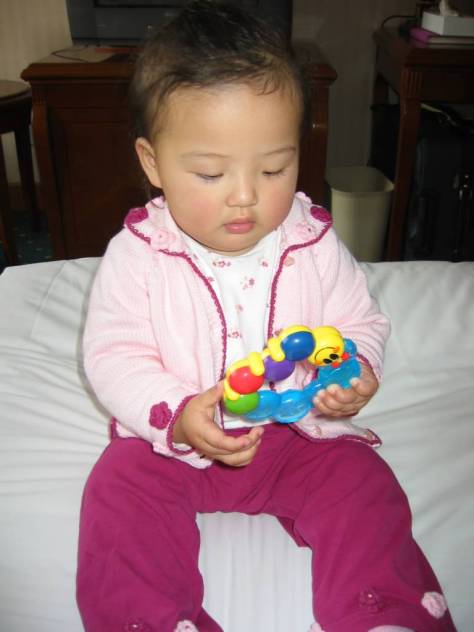 All dressed up for the day. 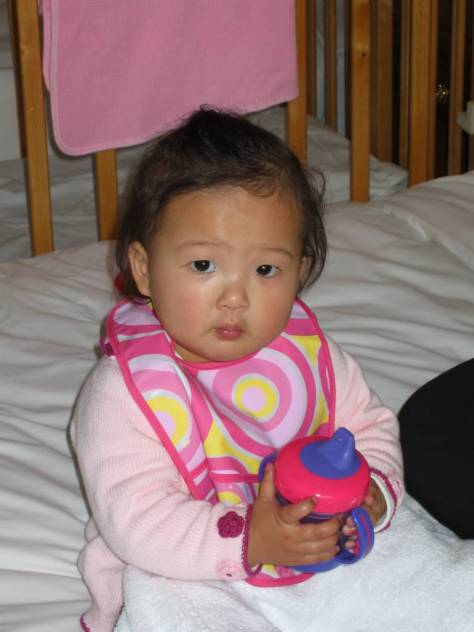